Kenya is a secular state. No religion can therefore claim monopoly over the nation and it’s systems. Christians are more than Muslims, yet they are not any more Kenyan than the Muslims are. We are all children of Kenya.

There may have been historical injustices, unequal distribution of resources and outright disregard to the plight of particular regions of the country. Yet we are far much better off than we were ten years ago. We have a new constitution. We have increased representation. We gave devolved governments. The common man’s plight can finally be listened to.

Today, Kenya finds itself where it was close to 17 years ago. The year was 1998 and the scar though healed, is hardly forgotten. Then there was the Kikambala bombings, and much more recently, the Westgate, Mpeketoni, and Garissa massacres. All having the hallmarks of religious chauvinism and faith based intolerance.

What is disturbing is the great silence from our Muslim brothers and sisters. Why when your friends, neighbors, colleagues and even fellow Kenyans are being butchered? Is Allah really a reflection of the fundamentalist foot soldiers that kill, butcher and maim in his name?

Never have I seen Muslim activists take to the streets to protest these killings! Yet when Sharia laws were being reconsidered, there was disquiet. Or does Sharia law allow this heinous murder of innocent civilians just minding their business?

Where is your anger, my Muslim brother, on seeing all those gory images splashed on social media in the name of Allah and Islam? Where is your loud reaction of pain and disgust? Or do you enjoy it when others die while you walk scot-free for being able to recite the ‘Shahada’? Where is your humanity?

If it were the other way round, I would not have sat down to see anyone persecuted for their faith. This is not just terrorism. This is persecution. This is the crudest form of advancing religious ideology!

It is good that Hon. Duale finally saw the need to crack the whip on Alshabaab financiers and sympathizers. It is even more sad if he knew that these people existed all along. All through Westgate, all through Mpeketoni and now Garissa.

I want to be able to trust my Muslim colleagues. Just as I want to see them vent their anger via social media. I want to see them pray for the victims of Alshabaab in their Mosques. I want them to organize forums with other religions to reiterate their stand on freedom of religion.

If none of these happens, and after every attack you are continually spared, then you lack a conscience. How else can I explain the fact that in 5 daily prayer sessions one cannot find time for a Christian friend under persecution?

And worse still, how can someone who prays 5 times a day still find time in between to help in the senseless killing of Students just out to study?

My questions are numerous. Yet desperation drives me to ask them. Type your response. Or write an article to respond to this. I just need to get your opinion on this. 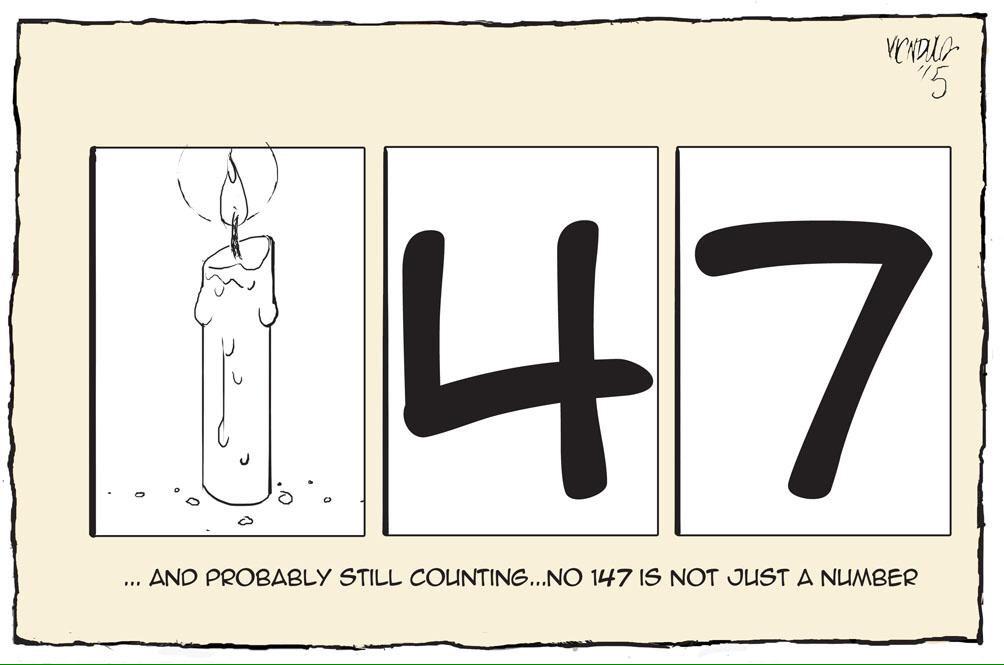 These are the questions on the minds of numerous Kenyans today. From #WestgateMallAttack to #MpeketoniAttacks and now it is #GarissaAttacks. Sandwiched in between is the Thika Road blasts and the list is endless. And what does the government offer in return? Empty reassurances and messages of condolences. We bury our dead and the cycle continues.

The police force is unable to ensure security in the country. And so is the entire ministry that has seen its fair share of sackings and resignations. Only that the new players play under the same defunct conditions. The system is not working. No matter who is at the helm of the chain.

Joseph Ole Lenku was clueless. Yet Joseph Nkaisserry is not proving to be any better. Yes, the tough talk seems a little bit more convincing; but that’s just it, convincing. The actions or inaction continue to haunt us several months later.

The sequence is the same. Foreign countries; Britain, America, France or Germany issue travel advisories; President Uhuru Kenyatta rubbishes these insinuations as baseless, reiterating just how safe Kenya is; then BOOM! Alshabaab strikes at exactly one of the areas mentioned as the basis for travel advisories.

When Kenyan Security Agencies claim to be on high alert, it must be in relation to collecting bribes by the roadsides! Since their efficiency is hardly noted. Either that or they intentionally stay away from loud gunshots until guns run out of bullets. A very costly tactic indeed!

At this rate, Mr. President, there may be no more Kenyans for you to govern. That is unless you are serious on our security.

The 147 souls lost in the hands of terrorists were breadwinners; parents and the youth. Bright young minds out to pursue their education with the goal of transforming the lives of the societies in which they reside. A price they paid for so dearly!

It is apparent that the most concerned persons about the state of Insecurity are the General Public. We don’t have bodyguards, unlike the president and the political elite. They are protected with the best of officers who should be out there protecting the country and its citizens. How can they understand the pains of the family of Miss. Janet Akinyi, terminated for being a non-Muslim student in Garissa?

The President has once again issued a tearful message of condolence. Seems like this is what the government is best in. Putting on a forlorn face before the cameras and blurting out their #RESTINPEACE phrases. Then the shift focuses on the Opposition and the game of musical chairs continues.