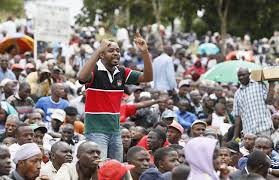 When Boniface Mwangi first made the decision at civil disobedience, his friends, with whom he had planned to heckle the then President Mwai Kibaki failed him. They simply did not show up at Nyayo Stadium, the venue for the 1st June 2009 Labour Day Celebrations. Boniface stayed on course nevertheless. He sat among the crowds and waited for his moment. I can only imagine what it felt like, waiting under the scorching sun, performance after performance, speech after speech. The fear that creeps in, the moment of doubt, the second thoughts, and the big moment drawing ever so close. When the President finally began reading his speech to the thousands who had turned up, Boniface lived up to his promise, rising up to speak. He called on the President to remember the post-election violence victims; to stamp his authority on the runaway corruption. He could barely say more; his actions were taboo. He was grabbed by security agents, his mouth covered, huddled out of the stadium, thoroughly beat up, and thrown behind bars. Swift and efficient ‘justice’ against activism in Kenya.

Who is Boniface Mwangi?

Boniface Mwangi’s background resonates with that of millions of ordinary Kenyans. He grew up in poverty in Eastlands, Nairobi in a family of seven children, typical of many Kenyan families back then. Boniface did not go to the best schools, maybe never even scored the best grades. He even had a stint as a street urchin. Yet he rose above all this to put his country first. He documented the images of the victims of the 2007/2008 post-election violence. These very images sparked him into action, called on him to act, to speak up, to advocate for change in his country, our country Kenya.

It is so easy, in all our immediate comforts, to forget that a few years ago, Kenya was on the brink of destruction. Many innocent civilians were killed because of their ethnic identity or political leanings. Much more were raped, shot at, maimed, left homeless, even displaced from their homes. Roads were impassable, with tires burning all over. Yet Kenya and resilient Kenyans survived all this, it would be a big mistake for us to get too comfortable. The symptoms still abound, and Kenyans like Boniface Mwangi can see them. It is up to us to rise up and treat the disease. It begins by standing up to speak. 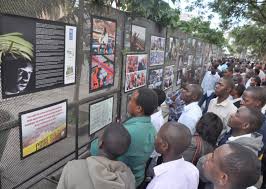 Boniface Mwangi’s strategies towards civil disobedience as an act of activism have changed over time. Following his June 2009 arrest, he began Picha Mtaani, a street exhibition of the post-election images he had captured while working for the Standard Media. These images were meant to foster national healing, especially among the youth who were the key perpetrators of the post-election atrocities. These images, the work of Boniface Mwangi and others in the media, played a great role in ensuring peace in the 2013 general elections. We learned from our mistakes, and these images, a painful reminder of why we cannot afford to backtrack on the promise.

Other acts of activism included supplying mock caskets to parliament to symbolize the politicians’ endless plunder of Kenya’s funds since independence at the detriment of ordinary citizens. Boniface Mwangi also led the supply of pigs to parliament symbolizing the greed by Kenyan Parliamentarians by their move to increase their salaries. On Friday 7th October 2016, Boniface was sued over allegations that he defamed the Deputy President, William Ruto through a Twitter message in which he claimed that the Deputy President was intent on killing him for his public pronouncements that Mr. Ruto is a corrupt leader and a land grabber. The court, however, dismissed the case against Boniface Mwangi.

The latest wave of controversy against the activist came as a result of his walk out from a live program #JeffKoinangeLive (#JKL) for which he was invited to discuss the state of corruption in the country in addition to him taking on the Deputy President in the social media over allegations of corruption and murder. Barely through the interview with renown journalist Jeff Koinange however, Gatundu South MP Moses Kuria, once a party to Boniface Mwangi’s criticism appeared in an attempt to join the show forcing the walkout by the activist, a gesture that was interpreted as cowardly and courageous in equal measure across the social media spectrum. The interview came a day before Boniface led a demonstration aimed at calling the President to either commit to the fight against graft or resign from office. The demonstrations were however thwarted by the police.

The big question, however, is whether Boniface Mwangi is really a Kenyan shujaa. Admired and loathed for his antics in equal measure, many have questioned his loyalty to foreign powers. In fact, in 2014, Boniface ‘retired’ from activism amid allegations of government intimidation and threats over his life. He would however not stay long in the shadows. This time round, it appears he is here to stay. His message, thought-provoking and projecting the ideal dream for the millions of youth in Kenya to rise up and act. I am not advancing a narrative that Boniface is perfect, far from it. Moses Kuria has claimed on his social media platform that the activist was actually peddling pornography at his time as a journalist in Standard Media, allegations that have not been corroborated by anyone else. More disturbing, however, is the fact that these allegations follow a consistent script whenever someone stands up against corrupt government officials or corrupt dealings in government. What no one is addressing is the corruption that has got Boniface Mwangi so worked up in the first place.

Boniface Mwangi in a previous protest

Boniface Mwangi comes from a background that believes in a better Kenya, much better than yesterday, the same Kenya that I am excited about, that I want to fight for. This fight, however, is not for Boniface alone. It belongs to each and every other Kenyan who is fed up with the kind of leadership that fancies corruption and shields ethnic bigots. That Kenyan should be you and me. It is time we stood up with Boniface Mwangi, for Kenya.

The writer is a Research Consultant for Savic Consultants in Nairobi.